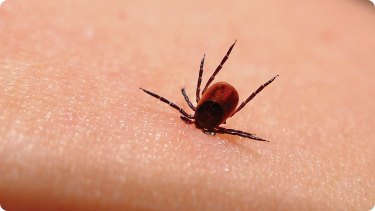 Lyme is caused by Borrelia burgdorferi which is a bacterial species of the spirochete class of the genus Borrelia. B. burgdorferi.

This species of bacteria exists in North America and Europe and is the predominant cause of Lyme disease.

The species, Borrelia, are considered double-membrane bacteria rather than gram positive or negative bacteria.

How is Lyme disease spread?

Lyme disease is a zoonotic disease which means it's a disease spread between humans and animals. It is caused by a bacterium called Borrelia burgdorferi.  This bacterium lives in mice and deer and are corkscrew-shaped bacteria, called spirochetes.  Borrelia burgdorferi survive in black-legged ticks when they feed on an infected animal and then migrate to a tick’s salivary glands.   When an infected tick bites a person, these bacterium are then injected into that persons' bloodstream.

Can Lyme disease be cured?

A 10 day to 4-week course of antibiotics is used to treat people who are diagnosed with Lyme disease, depending on the choice of drug.

Pain medications, such as ibuprofen, are sometimes prescribed to relieve joint stiffness. If diagnosed in the early stages, Lyme disease can be cured with antibiotics.

Early diagnosis and treatment is crucial.

Lyme disease, or borreliosis, is caused by the bacterium Borrelia burgdorferi and is transmitted to humans through the bite of an infected blacklegged deer tick.

Lyme disease is the most common tick-borne infectious disease in North America (Canada and the United States).

How prevalent is Lyme disease?